Death of loved ones…

Is there any hope?

Guy Lia, a fraternity brother of mine from Pepperdine University, is the Founder and an Executive Producer at Storehouse Media Group. 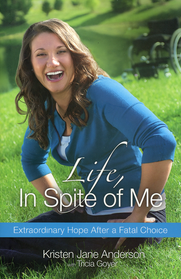 He is working on a film that will tackle these difficult issues from a Christian perspective but he needs our help.

Here’s what Guy says about the film:

The film is based on the true story of Kristen Jane Anderson, a teen who found herself spiraling into an endless depression following the deaths of 3 high school friends, her grandmother and then finally being date raped by someone she thought she could trust. Kristen made the fateful decision to end the pain and find final peace by throwing herself in front of an on coming train…but God had other plans.

We believe this message of grace, redemption and hope will save lives for Christ and cross the faith and secular divisions.

Please consider doing your part to support the film project so that we can influence Hollywood and send a message that Christians want more faith-friendly films!

Here’s how you can help.