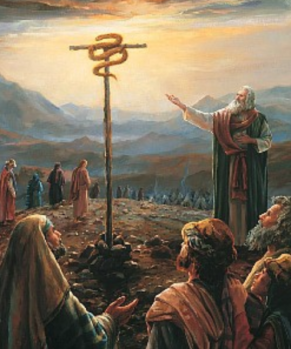 You can’t do anything.

I mean it. You can’t do anything.

I am sure you are quite competent in certain things. You might even be an “expert” in a particular field. Some of you are quite talented in the arts, fixing computers, arguing court cases, plumbing, teaching, etc.

The Israelites were wandering the desert. They still had decades to go before they would enter the promised land. Going around and round the desert. I get it. It would be pretty depressing. So, what do people do when they are stuck? They complain. And, the Israelites were really good at complaining! People are really good at complaining. You and I would have complained too.

“Why did God bring us out to the desert to just have us marching around in circles. There’s no water in the desert. There is no food in the desert. Oh those onions! I, so miss those sweet onions of Egypt!” (I added the onions part. I don’t even like onions. Who would ever miss onions?!?!)

When they repented, God told Moses to make the Bronze Snake and put it on a Pole.

Snakes are always bad in the Bible. It was the serpent who messed everything up in the Garden of Eden. Why a snake? I don’t know.

But the thing that is really astonishing is that the only requirement to be saved from death was one thing: Look at the bronze snake.

You can’t do anything.

Salvation was totally dependent on the promise of God that those who looked upon the serpent would be saved.

Now, check this out:
Just as Moses lifted up the snake in the wilderness, so the Son of Man must be lifted up, that everyone who believes may have eternal life in him. For God so loved the world that he gave his one and only Son, that whoever believes in him shall not perish but have eternal life (John 3:14-16).

Look at the crucified one. His name is Jesus.

Believe in Jesus and be saved.